This is my final chapter: 6 of my choose your own adventure book. If you have not read my book before: my book “BEHIND THE SCENES” is about a 12 year old girl named Mabel who has lived at the Lepary hills underground headquarters ever since she can remember. And yes- you guessed it- she is an agent at the L.H.S.O (Lepary hills spy organisation). She is strong, smart and skilful in every area of the spy training system there is.

In my last chapter: Uncovering the truth, Mabel got an unexpected note from Haley saying she knew everything and all about Daniel, her adoptive father and that Rob had been microchipped to find Mabel and stop her, even though he was just her handler; who knows what he could do?

You readers voted mostly on Mabel saving Haley herself straight away, even though Rob could be dangerous and who knows what this smuggler could do. Here is my final chapter of Behind the Scenes:

Mabel finally decided to pluck up the courage to save Haley herself. She knew although,  this was the most dangerous and risky choice- but Haley needed her. She also realised that she had no defence or tech gadgets apart from a memory eraser and a laser pen. She looked up photos of where Haley was held the non- spy way, through a real-estate website and decided to draw a blueprint of the house. She found out that if she found Rob first and managed to de-chip him she could trick Daniel into getting out of the house so she could save Haley. Mabel thought that the way to do this was to send her tracker to the L.H.S.O so Rob would go there and if she could send to the L.H.S.O a message explaining Rob then they could easily “handle” him. Soon that was managed using the secret L.H.S.O SOS site and sending the message with a school computer. This is an unstable copy of the blueprint: 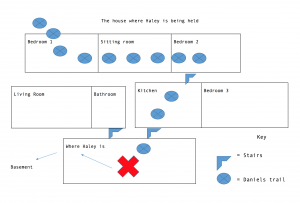 Mabel had a plan, a pen and a perfume (fake of course- memory erasing spray) could she pull this off?

She ran straight to the house and found that Daniel was, thank goodness not there. She went down to the basement and then began. The first thing Mabel did was lock all the doors into the house, then used her laser pen to laser a hole in the roof of bedroom one, she wanted to be able to get Daniel to climb into the hole in the roof of bedroom 1, go through the Bedroom 1, the sitting room, bedroom 2, the stairs, bedroom 3, the kitchen, down to the basement and get played so hard that eventually after a little help with her fighting skills and Haley she could knock him out enough to take him to jail without him waking up. Now the fun was about to begin.

Daniel had by this time worked out he had been locked out, but with his tracker he worked out that Haley was still in the basement. He knew that of course it must have been Mabel that had done this but wasn’t worried because; unfortunately he had a knife, a taser, a bottle of his famous Pupley’s soda,  and a short term knock out gun with him. He took less than Mabel thought to work out the hole in the roof because the part of the roof that Mabel had taken out was in sight. He climbed up the house and jumped into the hole.

Daniel was met with an unpleasant fall into the hole and blacked out for a minute. When he woke up his knife was gone! Mabel had impressed him but he wasn’t scared yet. He found although why he had knocked out- he had landed on an unstable chair that was stringed so when he jumped on it, it fell giving him an acing knockout.  Daniel then stepped into the sitting room but stopped and brought out some flour! Mabel knew exactly what he was doing though. He blew the flour out of his hand and homemade laser beams were all set up around the room, Mabel was upset that he could tell- this was a high level spy emergency security trick; it was not although that hard to set up. All you had to do was set your laser pen to stay on and put small mirrors that deflect off each other around the room. Daniel said with an evil grin “Well Mabel, if you had gone back to the organisation you would have at least saved your pathetic life.” With that he got out his knock-out gun and shot all the small mirrors into tiny shards that fell to the ground, then he shot the pen which broke. “Nice try!” he added.

He started heading for the next room, but as he went in the door shut and the lights switched off. He saw electric blue eyes and then their owner said “What is it good for” and then the eyes disappeared, glass smashed and the lights switched on.  Daniel cursed and shouted as he found his famous soda had been smashed on the ground- but the liquid was no where to be seen! Mabel must have taken a sample and then she could prove he was guilty. He was red with anger. But then he realised he could get rid of the evidence and take care of Mabel. He raced through the kitchen shooting anything in his path that looked like a setup, he wasn’t fooled this time. Suddenly his gun ran out, he cursed and shouted again but then came into the basement.

Haley was exactly as he had left her; tied up in a chair with tape over her mouth. Then the electric blue eyes shone in the corner. “Finally, you come to an end.” He spat. But Mabel managed to word is anger by saying ” I see you’ve lost your knife, gun and- oh is this sample of Pupley’s soda yours?”. That got him going. There was a great fight of spin kicks, floors, straight punches, side kicks and more and more. Finally as Daniel was aiming for a low kick Mabel spinned him to the ground an he was once again knocked out. As Daniel was slowly waking up, Haley had been un roped and she said to him in a gentle voice “Good night, Dad.” And with that Mabel hit him in the neck in a special spot so he went right to sleep.

After this Daniel was locked up and Haley joined Mabel and became an agent. All was well at this stage so without further or due I would like to say:

Sorry, my mistake this wasn’t an end. This was a new beginning…

This is chapter 5 of my choose your own adventure book. If you have not read my book before: my book “BEHIND THE SCENES” is about a 12 year old girl named Mable who has lived at the Lepary hills underground headquarters ever since she can remember. And yes- you guessed it- she is an agent at the L.H.S.O (Lepary hills spy organisation). She is strong, smart and skilful in every area of the spy training system there is.

In my last chapter: Disappearance, Mabel was at the nurses office talking to her handler Rob (who was in disguise) about Haley. There was a problem though: Mabel had left her undercover magnetic microfibre backpack out in the open. Also in that backpack was all her disguised gadgets which anyone could mistake for real things and end up tasering, gassing, lasering or memory erasing themselves by accident. They could also find the tech gadgets and find out that Mabel was a spy. When Mabel tried to find the backpack Haley and the backpack had disappeared! You readers voted and it tied for option 2 & 3 so I decided option three would be the best. Here is chapter five:

Oh no, this was bad. This was really, really bad! Mabel decided that she shouldn’t panick, just go somewhere pretty much isolated and have a look at the objects left behind: A note, a USB, her memory erasing perfume and laser pen. She decided to check her gadgets first. They seemed normal, the laser pen worked exactly the same and when she scanned the memory eraser it was fine. She decided to look at the note.

Mabel, you and your entire orginisation are in danger, my so called father is out to get you and the LHSO (Lepary Hills Spy Orginisation). I know about this because I once had a friend who worked there and knew I was trustworthy. They told me about my father smuggling “Pupley’s Soda” that stops anyone from speaking and doesn’t have a cure. My father kidnapped them though and I have never seen them since. I know all about your mission and what you need to do. By the way I destroyed your baackpack and gadgets apart from the ones you have so no one can use them against you. If you are in, I will help you save the orginisation and stop Daniel (my “father”). Your mission if you choose to accept it is to destroy the USB which my Father needs to complete what he is trying to do. Also with the memory erasing perfume I need you to spray Rob your handler. Why: my dad implanted him with a microchip that is set to hurt you, the memory erasing spray will wear it off. I am sorry but you will need to trust me- my dad knows that I sent this to you, I need you to save me or he will succeed. Trust is the key to this mission.

Oh wow this explained a lot. Well, Haley hadn’t explained fully but Mabel knew that she could trust this note. She took the USB and lasered it, there was no chance of it working now. She had also worked out that Haley had meant she was trapped on Trustmis street in the house called “Sion” when Haley had said Trust and mission and key as in the way to unlock where she was. But there was one thing Mabel wasn’t sure about: What should she do? She wanted to go save Haley straight away, but what could she do? Daniel would probably have a lot of tricks up his sleeve- so mabye she should go to the orginisation first to get backup. But then what if Rob had been given instructions and she needed to spray him first? Oh Mabel needed to know what to do.

That’s the end of chapter five! Now Mabel really needs your help, what should she do?