Hi World,
This is chapter 4 of my choose your own adventure book. If you have not read my book before: my book “BEHIND THE SCENES” is about a 12 year old girl named Mable who has lived at the Lepary hills underground headquarters ever since she can remember. And yes- you guessed it- she is an agent at the L.H.S.O (Lepary hills spy organisation). She is strong, smart and skilful in every area of the spy training system there is.

In my last chapter “Greetings by a Bash” Mabel was trying to find Haley. Mabel ended up with Haley coliding into her, so Mabel decided to… this is where you readers came and voted mostly for Mabel to start coughing like mad and see what Haley would do.

Her fake coughing was working because Haley reacted really fast. She took Mabel down to a nurses office without uttering a word. The good thing about this was that the mission file was right about Haley being good hearted. The really bad thing was that Mabel didn’t get time to grab her magnetic microfibre backpack with all her disguised gadgets which anyone could mistake for real things and end up tasering, gasing, lasering or memory erasing themselves by accident. They could also find the tech gadgets and find out that Mabel was a spy.

At the sick bay Mabel almost was sick. because there right in front of her was Rob, her handler. He was even wearing the whole outfit, coat and all. He looked H,I,L,A,R,I,O,U,S. But when they were alone he exploded: “Don’t ask, Don’t talk. Me talk, you not talk cause I talk and you don’t. Ok so that was good that you found Haley. Whats bad? Haha, oh just your entire cover is about to be blown! Ok I will see if I can track your bag and blow it into smithereens but there may be some inquireys about that not too mention… um, not to mention cough drops- take plenty of those.” “What are you talking about? What are we going to do about the…?” Mabel shut her mouth. Haley had entered the room. She said that she was going to fetch Mabels bag for her. “Ok thanks.” “Wait! I mean don’t!” It was too late, Haley had gone.

Mabel raced to the place where her bag was, but what was this: the bag was gone! Haley wasn’t anywhere either! Rob started shouting in her earpiece again. “Well have you got it? Have you? Mabel?” This wasn’t right. Mabel felt confused, all she knew was that the bag was gone- and so was Haley.

Now your turn to choose how the story goes:

She jumped, she sat, she bent,
each has a different consiquence,
you choose a path to see,
what future Mabel will be,
make sure you choose what is right,
or you will find Mabel won’t rise…

1) Mabel tells Rob to get Boss Maudly, the Boss usually knows what to do.

2) Mabel takes the earpiece out, and is determend to find Haley herself.

3) Mabel starts to look for evidence, only to find a note, a USB and- her memory erasing perfume and laser pen!

Hello Readers,
This is chapter 3 of my choose your own adventure book. If you have not read my book before: my book “BEHIND THE SCENES” is about a 12 year old girl named Mable who has lived at the Lepary hills underground headquarters ever since she can remember. And yes- you guessed it- she is an agent at the L.H.S.O (Lepary hills spy organisation). She is strong, smart and skilful in every area of the spy training system there is.

In my last chapter “preparations” Mabel accepted a mission to get information on Daniel Losken who is a big suspect of smuggling “Pupleys soda” which has a non-curable affect of making whoever drinks it to never speak again. Mabel got some very technical gadgets from the tech produce place and she got her disguise done. You readers had the most votes for… option 3! Which you will learn about in this chapter. As always, I recomend listening to the clip below while reading chapter three. So sitback, relax and enjoy this chapter.

Chapter three:
Greetings by a bash…

When Mabel looked in the mirror she couldn’t beleive what she saw. 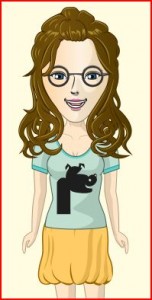 “you have got to be kidding me.” She said. The proffessional disguiser asked what was “ze” matter. Mabel acted like she loved it (she didn’t go through the misleading course in the system for nothing) and headed to her room to sleep on it.

In a flash it was the next morning and Mabel found herself in the undercover van on the way to Haley’s school. She had tooken matters into her own hands a bit with her disguise: she swapped the cyber glasses with computerised contacts and she changed the skirt to a checkered one. She had done the disguising course and new these few changes would help her look a) more blended in b) like she had less to hide c) this outfit would be easier to run, climb, do stunts and fight with. Now she looked like this: 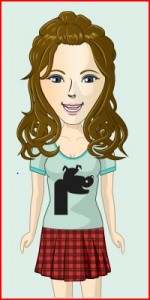 Rob started to do the checklist:

“Just in time, we are here Mayo!” Rob announced. Mabel started to try and explain that if Rob called her that one more time she would knock him out. He did not pay any attention. The preparation workers went through everything with Mabel again before she was ready. She already knew everything but let them do their job. Finally time to make some friends.

The rest of the day was mostly a blur, Rob kept shouting in Mabels ear thinking he found Haley. “Just hold your tongue!” Mabel said, shrinking into the shadows of a pole. Just then a girl with a giant pile of books bashed into Mabel. A blur of a girl picking up books came into view. Mabel helped the girl grab all of the scattered books and sheets. All of a sudden Rob shouted in Mabels ear “Thats HER! THATS HALEY!”. Mabel gasped. Haley suited the file perfectly.

Wow I do love a cliffhanger. Hehe! So this is probably one of the most important choose your own adventure. Keep in mind this is fully your decision, don’t go with the croud. all so remember that Haley is very sensitive and insecure after having a bad bonding experience. Here are your options:

Hey Readers,
Today I am starting something new called “Song of the Month” so each month I will be posting a little bit of information about a song, why I like it and the link to it. The first song of the month is (By the preview picture you can probably tell) drumroll…
FIGHT SONG!
I found a interview with Rachel Platten (The artist) on a website: http://www.top100songscenter.com/fight-song/ about her FIGHT SONG if you want to check it out.
Info:
-So this song is rated 3 and 1/2 stars which is pretty awesome.
-The message sent is “Never ever give up in hard times or conditions.
-The first stanza is about how small steps can have large impact.
-The second stanza is about not wanting to make the same mistakes and repeating the past.
-The third stanza is about her you are the owner of your life, not anyone else.
-The fourth stanza explains that her past was due to others, and she feels overwhelmed
-In the last stanza’s she says: “she has a desire to restore her past. She feels spark in her bones to change her present and she has hope in spite of problems”.

This song is so inspiring and is really, I guess “pure” I also like all the metaphors like “a small boat in the ocean” and “I might only have one match but I can make an explosion”. I really find this song really easy to picture and image, and the words and peices fit together to make a perfect blue sky.

This is the official Fight Song Video and it is totally appropriate, the only thing is it is pretty sad at first but then it’s smiles all around so it’s all good. This is it:

Hi Readers,
this is going to be my last post of passion action for it is the end of term 2 tomorrow and in the whole of year 6 we have completed our projects. Today we presented our projects in the JYA foyer to Mrs V (the head of junior school), some of the year 6 parents, fellow year 6’s and the year 5 students because they are creating their passion projects next year. It was a great experience, my passion project went really well, my music video was a success and it was a very enjoyable experince for me. The skills I learnt from creating the music video was the sound projection, the production of editing, fiming technigues (kepping the camera still is one), lighting settings, transitions through clips, the fact of what am I going to film, the story base of the video, and all along every single clip keeping the camera in focus. The pros and cons of the presentation were these: the cons: where I was placed in the JYA foyer wasn’t exactly a fabulous place to present, there were many people crammed in my area and not as much people came to visit the area, secondly the fact that 9 people were presenting per 10 minutes at the same time, when it was my turn to present a lot of people right near me were presenting at the same time and it was very distracting for most of the people near me presenting for they had music as well. The pros were the amount of people that came to watch the presentation was a very large number altogether and when it wasn’t your turn to present you got a chance to watch other peoples presentations. I really enjoyed creating the music video and I would really encourage creating one if anyone just thinks they might like to. Thanks for reading my last post on my passion project!